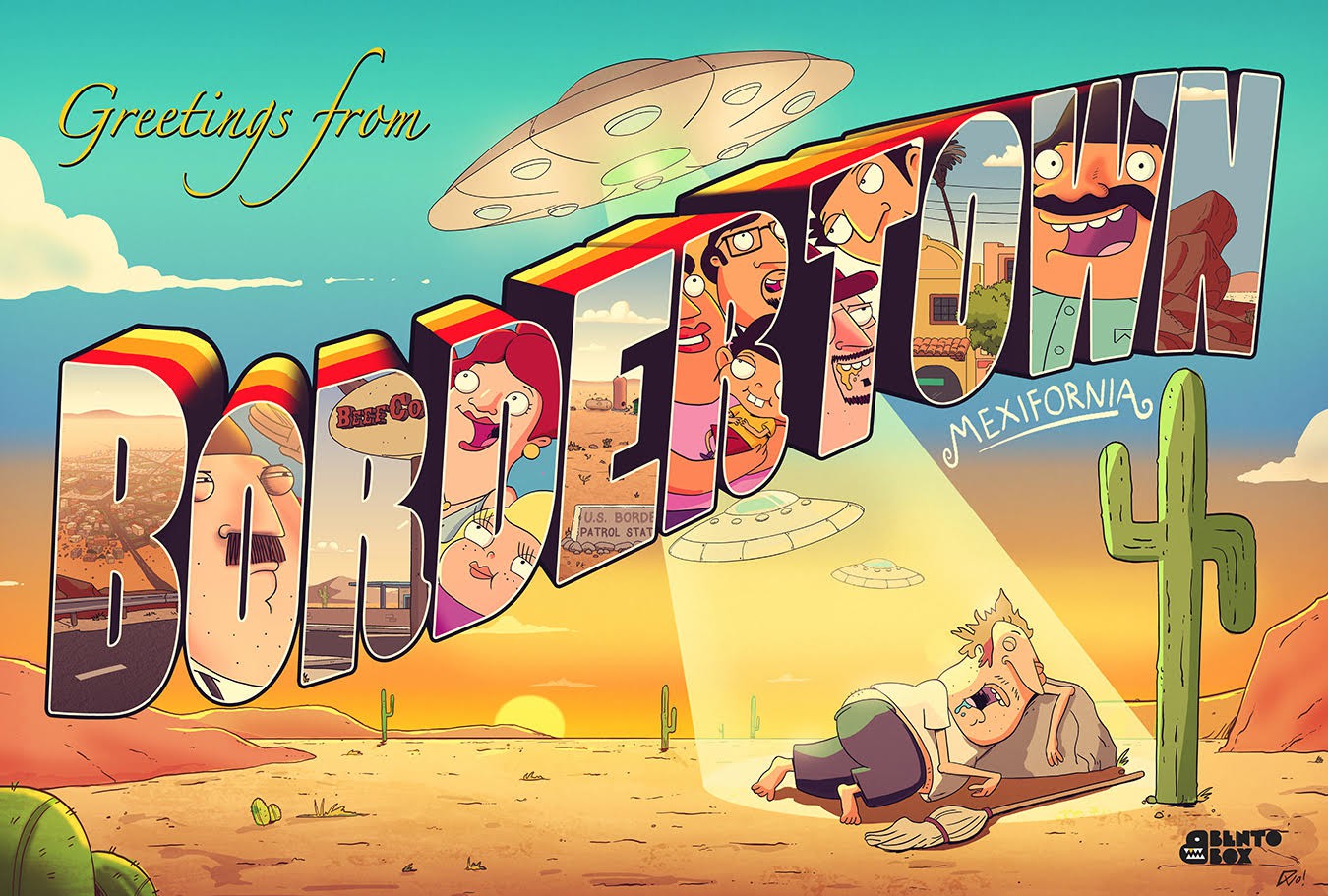 In case you’re just some random Googler who stumbled across this page, here’s the synopsis: BORDERTOWN satirizes life on the U.S.-Mexico border — la migra, changing demographics, religion, the drug war, and so much more.

Yeah, part of it is shameless self-promotion — I’m a consultant, while Lalo is a staff writer. But we’re doing it because we truly do believe this series is the Great Brown Hope: the network program that will finally show raza in all our hilarious, proud, chingón glory and that will become a ratings smash that’ll allow the beginning of #televisionreconquista.

All the episodes are done. They’re hilarious. They’re pioneering. And they’re just waiting somewhere, ready to debut in January of next year.

But Lalo and I are restless, so this summer we went to our FOX bosses with a proposal: Let us screen one episode to the public, to build up buzz and to show community members that Bordertown isn’t another ¡Rob! They agreed, and so Lalo and I have planned a Fall full of screenings!

Anyoo, below is the current, tentative schedule. Unless noted, admittance to each screening is FREE. AND either Lalo or Gustavo (or both!) will give out free swag afterwards and answer any questions you may have. Keep checking back for new screenings.

NOTE: Screenings with next-to-no information are Lalo’s because he’s a lagger like that haha.

Gustavo moderates a panel with Bordertown creator Mark Hentemann and show stars Nicholas Gonzalez, Alex Bornstein, and Missie Pyle about the tricks over the voiceover trade. Members only, so any actor who thinks they are the person of a thousand voices should definitely go to this. 5757 Wilshire Blvd., Mezzanine Level, Los Angeles. 7 PM. Tickets here: https://members.sagfoundation.org/events/5656

Lalo will screen as part of UNITY: Journalists for Diversity. Bug UNITY head Russell Contreras for the details.

Lalo returns to his alma mater.

Gustavo screens at HIS alma mater, but NOT by invite of the department he graduated from – discuss… 7 PM One University Drive, Orange. 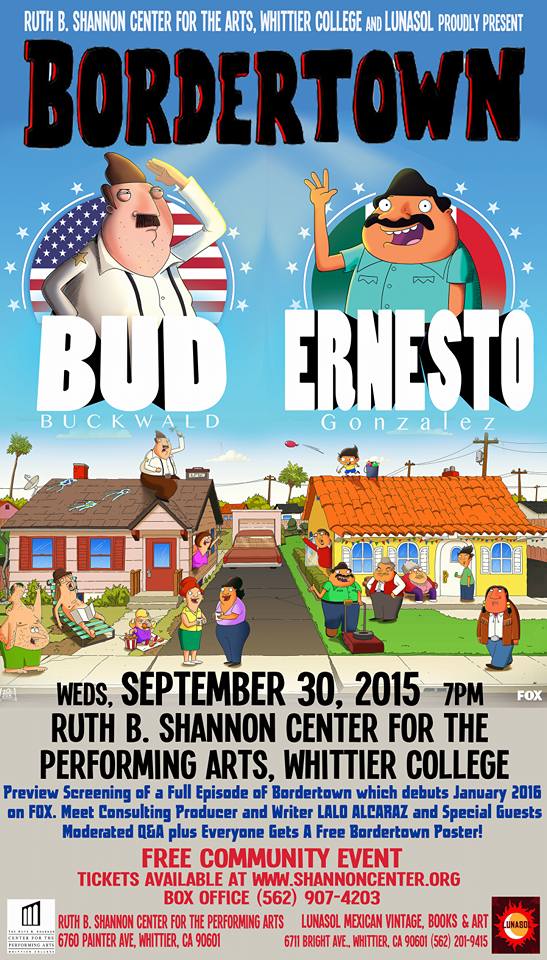 Whoever’s in charge of Lalo here, can you make sure he doesn’t try to punk Arpayaso TOO bad?

Gustavo hosts probably the coolest screening of them all. $15 gets you a 3-course meal in the oldest Mexican restaurant in Southern California, the restaurant whose tacos dorados Taco Bell’s founder stole to create their crap. Get your revenge by filling up on the OG, AMAZING version here! Proceeds for this event go to a non-profit supporting Inland Empire youth. Dinner starts at 5:30, with actual screening starting whenever Gustavo stops eating. 602 N. Mt. Vernon Ave., San Bernardino, (909) 888-0460.

All Lalo said for this one was “Rio Grande Valley.” Fascinating…

Gustavo and Lalo will host a screening. Guisados probably to follow….

Peterson Hall 141, 6:30 PM. Gustavo and Lalo will be there. Screening is free, but parking will cost ya…

Gustavo will be presenting in the evening.

Gustavo will be presenting at his alma mater in the evening.

Lalo, Gustavo, and Tex[t]-Mex madman William Nericcio will not only screen a Bordertown episode and do a Q & A, but Nericcio will also unveil his own digital DESMADRE. Screening is FREE, but RSVP is required—contact bordertownscreening@gmail.com for more info. 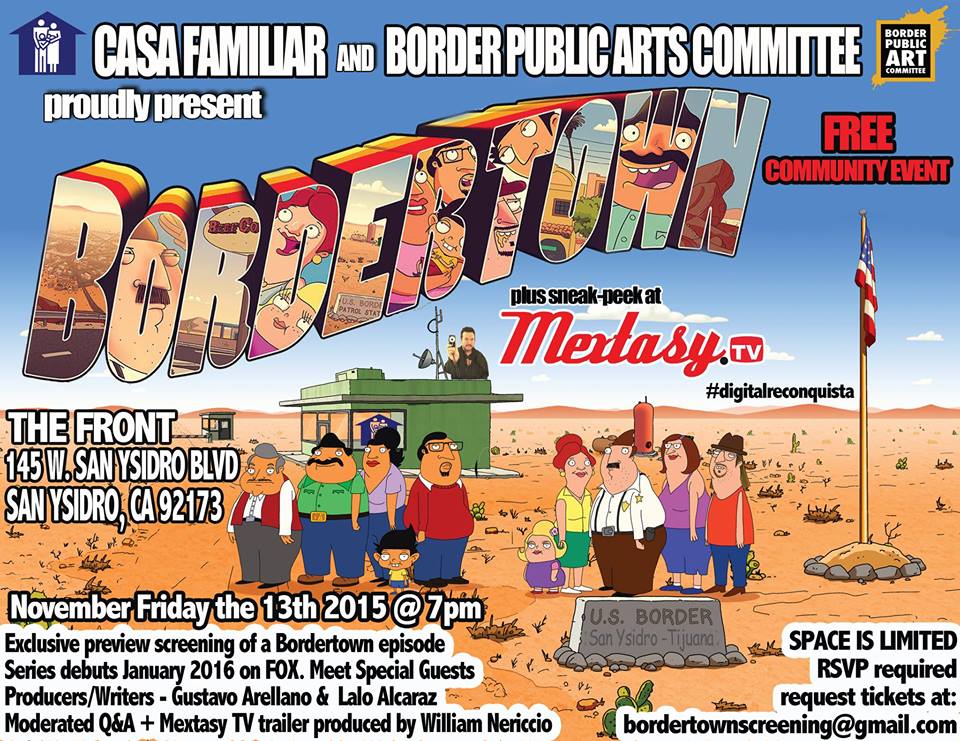 Gustavo and Lalo will be presenting.

SCREENINGS CONFIRMED BUT NOT SCHEDULED:

Other scheduled appearances in the work for Denver, Bakersfield, SanTana, Ventura, y más!