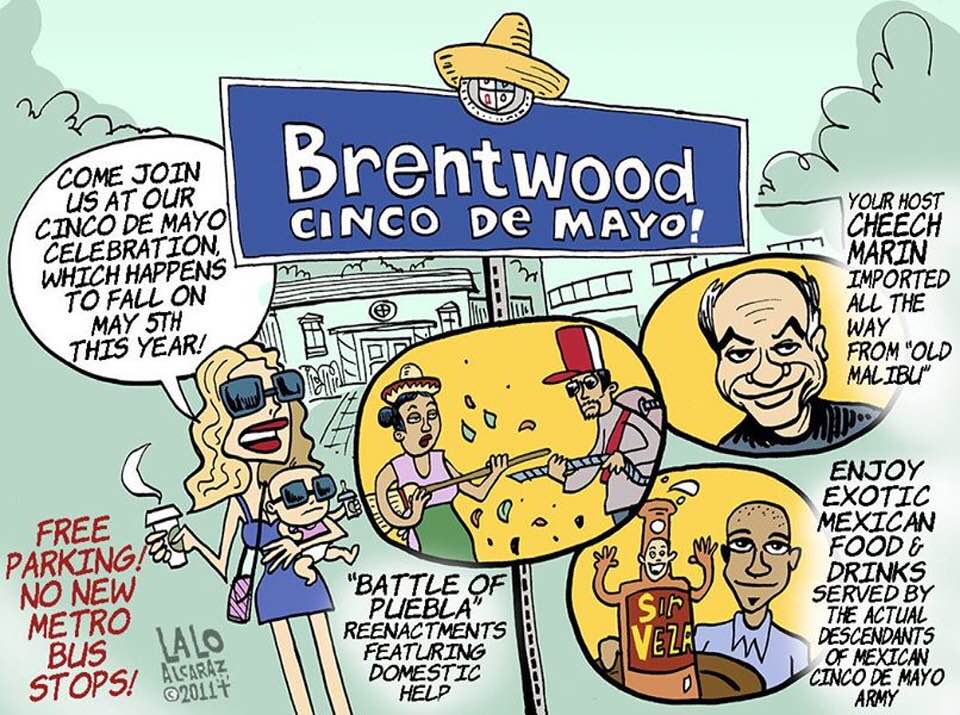 From December of 2010 through Spring 2011, I was the editor of Brentwood.Patch.com, the West Los Angeles outpost of AOL/Huffington Post’s “hyperlocal” news operation.

For Cinco de Mayo, I commissioned three stories: The real history of Cinco de Mayo as related by a professor at Mount St. Mary’s (Brentwood’s only college), the best places to celebrate with nachos and beer in Brentwood and a cartoon from my friend Lalo Alcaraz about how the Battle of Puebla is understood in Brentwood.

I was thrilled to score a cartoon from a cartoonist of Lalo’s stature at Patch’s standard rate of $50.

This was the same week that AOL and HuffPo honchos announced a Latino outreach initiative, probably to coincide with Cinco de Mayo. I thought they’d be pleased.

The cartoon went live just after midnight on May 5; I Tweeted about it, per AOL policy, and posted a link on Brentwood Patch’s Facebook page. The headline Lalo and I wrote? “It’s Cinco de Mayo – do you know where your gardener is?”  I thought the cartoon — marked as opinion — perfectly expressed Brentwood’s reality and it still makes me laugh.

Early the next day  I got a call from my regional editor directing me to remove the cartoon and delete my Tweets and Facebook posts.  Someone in AOL’s New York headquarters decided Lalo’s image of two Latinos “reenacting the Battle of Puebla” (a housekeeper with a broom and a gardener with a leaf blower) constituted “blatantly racist stereotypes” (it could have been “patently racist”.)  They were objectionable, said my boss.

“Wait!” I said.  “Lalo IS a Latino.  He is the country’s first nationally-syndicated Latino cartoonist (La Cucaracha.) He has written books and won awards! Are you calling Lalo a racist?”

“New York finds it objectionable, ” was the reply.

The next morning my boss, and her uber-boss, the West Coast editor, called me up to tell me I was fired for violating my employment agreement with AOL by posting “racist” material.

Although my friends knew what happened, I kept  the incident pretty quiet. I had been out of work for two years before Patch and didn’t need a rep as “troublemaker” complicating my job search. At the same time, I was personally hurt by the charge I was racist. I was with MLK in the March on Washington in 1963.  Me? A racist?

I never was able to get another job.

But I’m an optimistic American who believes in the free market and being one’s own boss and owning one’s own destiny.  Lalo had mentioned on his Facebook page it would be cool to re-launch POCHO.com, which had languished over the years.

When I saw that, the proverbial light bulb glowed above my cabeza!

Our first meeting was last September.  We officially launched on January 1.

Success is the best revenge.

Note: Lalo asked me to write this because of a post today on JimRomenesko.com. I had responded to a Tweet about a student editor was canned for printing an “anti-black racist” cartoon by a black cartoonist.  Must have been the old 60s hippie in me: OMG! A FLASHBACK!