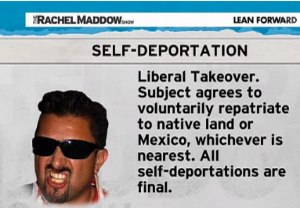 A busy ñewsweek brought the return to glory of the original self-deportationist, Daniel D. Portado, who, it turns out, is a fictional character created by POCHO Jefe-in-Chief Lalo Alcaraz; an Alabama plan to import Canadians to replace the immigrant labor that used to keep the state running; and militant MEChA murmurings about the Lack of Visible Latinos in the hit BBC/PBS series Downton Abbey.