One of my preferred topics for editorial cartoons has always been American mistreatment of indigenous people. Nothing makes me feel better than dreaming up a solid cartoon that reminds us all about the sordid history of our country’s crimes against Indians. The only thing more satisfying is seeing my ideas validated.

This week a dude sent me a “heads-up” about a Tweet featuring one of these editorial cartoons. I clicked the link and just about fell out of my chair.

They are eerily similar. The strange part was that I drew my cartoon in 2002, and the photo was taken last week in Cleveland, home of the Cleveland “Indians”: 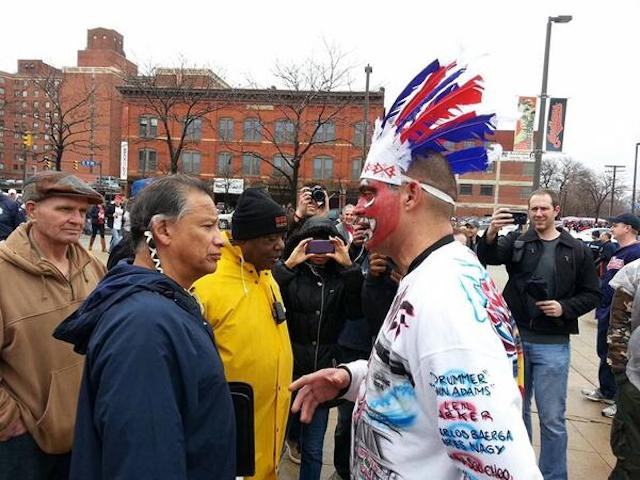 At first I thought it was just a hilarious comparison. Then I began examining the two images more closely and got a little weirded out. I went to the archives to pull up the big, high-res version of the toon (below, double-click to enlarge) and compared it to the photo. I immediately noticed the face paint, the writing on the shirt, the similar headdresses, and the nearly identical right hand position of the mascot-lovin’ dude: 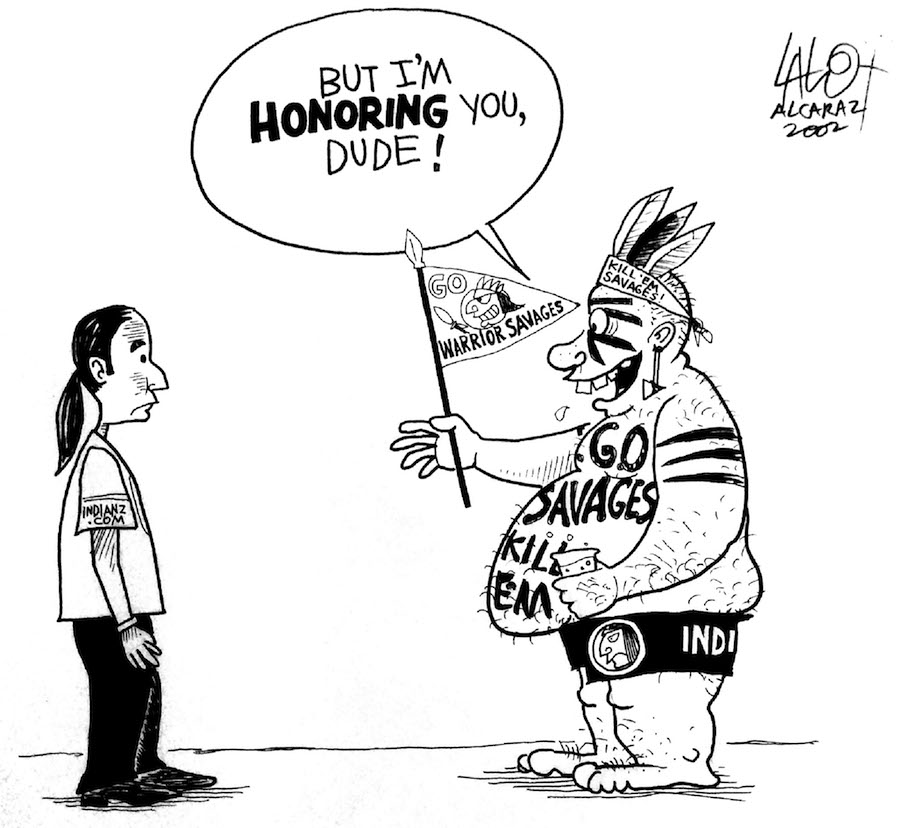 When I noticed the nearly identical pose of the Native protester in the photo and in my cartoon, I started tripping out.

My work has sometimes been imitated in life, like when the Mitt Romney embraced my Self Deportation immigration policy, which started as a reality-hacking hoax/joke.

Somehow this felt different than mere prescience or amazing foresight; it was something else.

I hate to embarrass myself further, but I must admit that I am a wannabe physics geek. Oh, I can’t do any calculations more complex than figuring out restaurant tips,  but I am interested in black holes, time travel and the like.

You might have heard some say that time doesn’t actually exist, and that all we have is the present. I’d like to think that maybe in 2002 when I was coming up with the cartoon, the image popped into my head directly from 2014 as it was happening and getting posted to the 2014 Internets.

In this scenario, events create ripples in spacetime and move both “forward” and “backward,” and eventually reach every point in spacetime. Or a cartoonist desperate for ideas.

So, while that sounds cool and otherwordly, the more likely scenario is that the Native American sportsball team mascot issue is not going away overnight, and has only moved a little since I drew that toon in ’02.

Regardless, we have to keep talking about this issue, and hopefully one day my cartoons will be but reminders of a very different past and future.

If there are such things.

We like making POCHO’s Ñews y Satire for you every day, but it takes money. Can you please help?

We like to afflict the comfortable, comfort the afflicted, and mock the pendejos. Please, can you help?

POCHO has no big backers, no mega investors, no brand-name “sponsors.” We get a trickle of revenue from Google Adsense (it barely pays the iPhone bill) and that’s all. No one owns us, no one tells us what we can or cannot do. But independence ain’t free. We’re hoping to raise some extra cash from you, our loyal readers. Can you help?

We would like to upgrade our hardware/server arrangements, redesign the website, and maybe someday pay our hard-working editors, talented writers, visionary photographers, and kick-ass cartoonists. Oh yes, and our pinches lawyers tambien. Can you help?

Your small donation will keep the Ñews y Satire flowing. Click on the DONATE button to give. We thank you for your support.